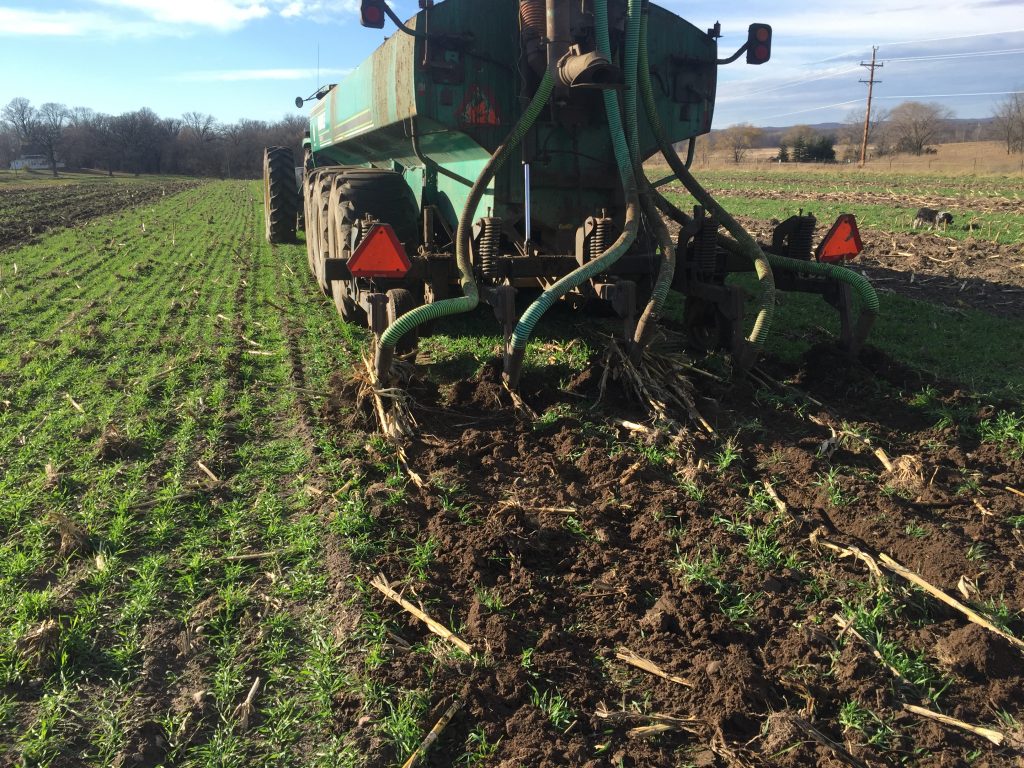 Producers who apply liquid manure in the fall might consider use of a cover crop as a nitrogen (N) management tool. Recent on-farm research in Minnesota compared manure management with and without a cover crop.

Liquid swine and dairy manure is frequently applied in the fall, prior to planting corn the following spring. However, corn does not begin taking up substantial amounts of N until mid-June or later. Most of the N in swine manure and about one-half in dairy manure is in the inorganic ammonium form, which can rapidly convert to nitrate by microbial nitrification when soil temperatures are above 50 degrees, in either fall or spring. The remainder of the manure N is in the organic form which is more slowly converted to the ammonium form and later to nitrate. Nitrate does not bind to soil particles and can move in soil water out of the root zone to drainage tile or groundwater. The challenge is how to conserve that nitrogen until the following corn crop can use it.

Winter rye, when planted as a fall cover crop, can take up nitrate in both fall and spring. It is the most reliable cover crop in Minnesota for establishment after corn silage or soybean harvest and is winter hardy. Rye can also prevent soil erosion on sloping soils, especially after low-residue crops like silage corn or soybean. The challenge for farmers is to plant the cover crop as soon as possible before or just after harvest to ensure good establishment, and yet to slow nitrification by delaying manure application until fall soil temperatures decline.

In the 2016 and 2017 growing seasons, 19 on-farm trials across central and southern Minnesota were carried out to determine whether a winter rye cover crop, planted immediately after corn silage or soybean harvest and later injected with liquid dairy or swine, would take up a significant amount of soil nitrate, and, after termination, release it rapidly enough to meet the needs of the subsequent corn crop.

Drilled winter rye and non-cover crop control treatments, replicated three times per site, were established immediately following corn silage or soybean harvest in 2015 and 2016 using field-scale equipment. Later in the fall, liquid dairy or swine manure was injected into the winter rye and non-cover crop control treatments. Rye was terminated by herbicide in the spring before it reached 8 to 10 inches in height in most trials, and was usually tilled in. At termination, rye height, biomass, and N content were measured, along with soil nitrate-N in the 0- to 24-inch layer. Corn was planted at nine sites in 2016 and ten in 2017 after rye termination. Some trials received supplemental N fertilizer at a rate determined by the grower. Corn was harvested as silage or grain, depending on the trial, and measured for yield and N uptake.

Results are summarized below.

The full report is available at https://z.umn.edu/3k2o.