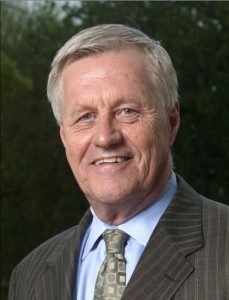 The Minnesota Pork Board recognizes Rep. Collin Peterson as the first Legislator of Distinction award recipient.

One thing all farmers have in common is the desire for their freedom to operate. When this is put in jeopardy, farmers across all spheres of agriculture band together to fight for it. One of Minnesota’s greatest allies in battling government regulations in favor of pig farming and the freedom to operate was Representative Collin Peterson – the first formally recognized Legislator of Distinction award recipient for the Minnesota Pork Producers Association.

The Clay County native grew up farming alongside his father and attended college at Minnesota State University Moorhead, earning his degree in accounting and business, followed by a CPA certification. By 23, he started his own accounting practice in Detroit Lakes.

“My buddies talked me into running for the state senate,” recalled Peterson. “I had no idea what I was doing. I didn’t even know who held the office at the time.”

Peterson was a member of the Minnesota Senate for nine years, representing a northwestern district. Deciding he enjoyed politics and constituents telling him he was “good at it”, he left his accounting practice to pursue politics full time, running for Congress in 1984. The fourth time was the charm for Peterson, as he found victory in Minnesota’s 7th congressional district in 1990, defeating incumbent Rep. Arlan Stangeland. The rest is history, as Peterson spent the next three decades advocating for Minnesota, rural America, and agriculture while not facing a serious challenge through several election cycles until 2016.

When asked what kept him in politics for so long, Peterson referred to farmer’s pleas to keep him in office. “I didn’t think I’d ever get out of office because the farmers didn’t want me to leave,” he stated.

Dr. Gordon Spronk, constituent and ally of Peterson’s, stated, “Congressman Collin Peterson was good for American agriculture, he was good for Minnesota agriculture, and he was good for my family farm owned by my brother Randy and me. I knew him as my congressman, my friend, and my fellow agriculturalist. For his leadership and hard work pushing USA agriculture forward over the past 3 decades, I will forever be grateful.”

Peterson believes his background in agriculture guided his career in politics. He described the great knowledge disparities between the large majority of congresspeople and himself.

“Our farm had nearly every aspect of agriculture, and I learned how to do everything from fieldwork to feeding livestock. I understood how farming worked, and I saw what farmers struggled through to survive,” Peterson asserted. “There are very few people in Congress that have actual experience on a farm.”

Throughout his tenure in Congress, Peterson became well-known for his expertise, knowledge, and firsthand experience regarding agriculture. He became a spokesperson and credible source in Washington, D.C., utilizing his credibility to help drive agriculture’s agenda.

From the start of the United States-Mexico-Canada Agreement (USMCA) development, Peterson hit the ground running, knowing these markets were critical for pork exports. The agriculture committee doesn’t have jurisdiction over trade agreements, so he and other members of congress built coalitions of members supporting the work being done by trade representatives. Peterson described his part primarily as a “supporting role” to make sure everyone in agriculture was supportive of the USMCA’s successful passing.

“Trade is proactive, the rest is reactive. Pig farmers want to be left alone to do what they do best,” said Peterson.

He served on the House Committee on Agriculture for 16 years, leading the committee twice as chairman in the 110th, 111th, and 116th Congresses of the United States. He also served as the Ranking Member through five congressional sessions. During his time serving on the committee, he advocated for pig farmers through several crises, the most memorable occurring during 2020 with COVID disruptions resulting in packing plant closures.

During this period, Peterson described how he was able to get calls returned and have actionable conversations due to his long-standing relationships with lobbyists and other decision-makers. “It was because I knew people and they knew me. They knew I wasn’t jerking them around and was serious about the situation. There were no politics involved.”

Collaborations with JBS and corresponding unions resulted in changes to plant operations and installation of plastic barriers to prevent virus spreading and keep workers safe. Peterson’s communication with Governor Walz provoked the Minnesota government to pay attention to the situation and elicited positive response for pig farmers. His battle for pig farmers struggling through this time also resulted in relief measures and programs being put into COVID relief bills that helped reimburse farmers for losses they incurred while dealing with packing plant closures.

“Everyone was trying to do the right things, we just didn’t know how to deal with it all,” Peterson recalled. “It wasn’t pretty, but we were able to get through and hopefully now we won’t be caught flat-footed if something comes around again.”

Typically, a pig farmer’s attitude is to have the government leave them alone, so much of Peterson’s work revolved around keeping the government out of pig farmer’s hair and mitigate damage done by members of other committees. He mentioned confronting colleagues many times persuading them to “back off” in pursuit of a bill that could be harmful to farmers. More often than not, he admitted most members “are trying to do what’s right; they’re just listening to the wrong people.”

MPPA President and constituent of Rep. Peterson, John Anderson acknowledged, “During his time in congress Rep. Peterson understood the challenges we as producers were facing. As a legislator, he was effective to bring help when needed as well as work to curtail government overreach. Collin was a true advocate for the pork industry and for all of agriculture.”

He knew the impact of getting politicians onto farms to meet farmers face-to-face. Even if a politician represented a primarily urban area, agriculture still played an important role in that community. Many urban areas have a large population of food insecure constituents. Without agricultural support, there would be less accessible food to feed the population. By protecting agriculture and the food supply, prices stay reasonable. Rep. Peterson understood the need to bring along his urban colleagues to ensure food programs and other attributes of the Farm Bill were able to move through congress. With a five-year Farm Bill cycle, Rep. Peterson had a hand in the last six Farm Bills. The Farm Bill is a good example for bipartisan work, something Rep. Peterson was known for as he brought members from across party lines to work on food and agricultural issues.

In his political career, Rep. Peterson served as a mentor to countless politicians both from Minnesota and across the United States. One mentee was Congresswoman Angie Craig of Minnesota’s second congressional district.

“It was a privilege to serve alongside Collin Peterson, whose long list of accomplishments as Chairman of the Ag Committee – and commitment to working with folks on both sides of the aisle – is simply extraordinary. From day one, Collin showed a willingness not only to work with me as a colleague, but to act as a friend and mentor to a freshman member of his committee,” said Representative Craig. “He was a giant in Congress, and someone whose influence on ag policy and tenacious advocacy on behalf of family farmers is sorely missed. I’m confident that his legacy will live on for years – both here in Washington and back home in Minnesota.”

Though his time in an elected political seat has come to a close, Rep. Peterson continues to support agriculture and is currently heading the Midwest Council on Agriculture, a coalition of six Midwest states (Iowa, Minnesota, Nebraska, North Dakota, South Dakota, and Wisconsin) banding together to advocate for agriculture and sustainable economic policies.

Peterson convened the council out of necessity to protect rural policy and a strong agriculture sector in the Midwest. Modeled after the Southwest Council of Agribusiness – a highly successful group achieving wins for commodity groups – the group’s regional voice will “defend attacks on agriculture”.

The council is comprised of farmers, ranchers, agribusinesses, commodity groups, agricultural lenders, and those whose businesses rely on agriculture. Its goal is to augment what state and national organizations are doing while bringing a Midwest perspective.

“My credibility is still strong,” stated Peterson. “I still have sway with the house and senate committees, and this will bring me to the table.”