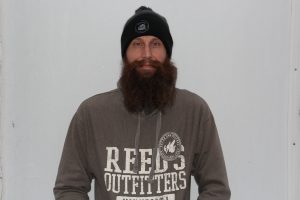 The Minnesota Pork Board recognizes Adam Ziemke of Waseca, Minnesota, as this year’s Swine Manager of the Year award recipient.

Leaders come in many different forms, some are boisterous and comfortable in front of crowds, others prefer a more humble, behind-the-scenes approach. This year’s swine manager of the year award recipient, Adam Ziemke, favors the latter leadership style and does so through leading by example, constantly learning and adapting, and going above and beyond to care for his pigs.

Like many in the farming industry today, Ziemke grew up on a hobby farm, though his was a bit more diversified than the average farm including emus and other unpopular species. The farm was located only one mile away from where he works now at Wingspan Pork. It was a natural occurrence for his uncle, who also used to work at Wingspan Pork, to invite Ziemke to help do odds-and-end jobs around the pig barns. At 13 years old, Ziemke was power washing barns and soon after was exposed to the nursery where he found his love for pigs, catering to them after school and assisting in loading them out before the school bells rang.

As he got older, he gained more responsibility on the farm. Now, at more than 20 years in his role, manages four wean-to-finish sites, with approximately 15,000 pigs at any given time. Ziemke does “a little bit of everything” on the farm, but daily chores, management duties, barn maintenance, and monitoring pig health constitute his primary duties on a daily basis.

“I love this job because it’s fun and challenging,” stated Ziemke. “I like trying to figure out what I can do to make things better and enjoy that there’s something different to do every day. No day looks the exact same.”

Ziemke is an astounding worker, rarely ever taking days off. The owners of Wingspan Pork and veterinarians who consistently work with him both noted his diligence in not stopping until every job is finished for the day. “The only time he does not show up is when he physically cannot get out of bed,” stated Dr. Joseph Yaros, DVM at Pipestone Systems.

Todd Selvik, owner of Wingspan Pork and vice president of the Minnesota Pork Board recalled, “During manure pumping, when he has to change the settings in the barns to prevent accidental loss, he will sleep on a cot in the office.”

Seven days a week, Ziemke tends to his pigs monitoring their health and overall well-being. He believes a strong work ethic is important to succeed in this job, as one must go above and beyond when taking care of other living beings. The pig’s lives depend on his work, so showing up every day, working hard, and staying until everything is done is imperative. Dr. Yaros pointed out Ziemke’s husbandry skills as extraordinary, stating his ability to tell when an issue with the pigs is arising several days in advance of other caretakers.

“The pigs he works with have often been health challenged,” acknowledged Dr. Yaros. “These pigs take extra work and bring on an emotional burden that other producers do not experience. Regardless of how difficult or frustrating the work may get, Adam continues to execute at the highest level.”

During 2021, the PRRS 144 virus attacked one of Ziemke’s sow units. He organized an effort between all farms in the system to collaborate, sharing notes, information, and solutions to assist in fighting the virus.

Selvik added, “He talked to anyone he could, looking for solutions and repeatedly said, “We are all in this together. As farms in the unit, we can get through this together.” He was vital in the recovery of the pigs coming from the sow unit for many farms.”

It’s no surprise that Ziemke has been awarded Hormel’s Spirit of Excellence Award on three separate occasions over the last two decades. Hormel’s Spirit of Excellence Award is presented to those who demonstrate exceptional quality, on-time delivery, and customer service and support, along with maintaining a minimum score of 92 on Hormel’s supplier rating index over the course of a 12-month period. The index score is determined by a universal measurement system that began in 1990 to ensure each supplier is held to the same standards.  Ziemke prides himself on receiving this accomplishment multiple different years through his meticulous standard of care and ability to provide an even-weighted group of pigs during all four quarters of the year. He described his favorite task on the farm is marking pigs when it’s time for harvest, and Dr. Yaros acknowledged his “excellent job coordinating marketing” played a huge role in receiving this award.

Selvik added to Ziemke’s achievements stating, “He is constantly in the top 20 percent for the least sort loss in the entire Big Stone Marketing Group.”

He described his gratitude for the exceptional work his team members do each day to ensure the health and safety of the pigs they care for, and how none of what he does, or the recognition he receives, would be possible without them. The team of four, along with occasional help during busy weeks, is small but efficient. Ziemke explained how years ago the same barns he manages now were filled with several more people. When asked how his team manages all the work he said, “We have a crew that works really well together, and we can get everything done well with just a few of us.”

Ziemke described his relationships with co-workers as “family-focused.” His right-hand employee, Jenna, started working on the farm after assisting with piglet vaccinations with her daughter, and Ziemke is also honored to be named godfather of Jenna’s son, who occasionally comes out to the farm to help. His other employee, Travis, has worked with him on the farm nearly as long as himself and is exceptional help, especially in the winter months. “We’re all like a big family out here,” he said grinning.

Not only has Ziemke been a major asset in training his own employees, but Selvik added, “he also has helped lead classes at Big Gain Feeds for other producers on identifying fallbacks and sorting strategy. The University of Minnesota has utilized Adam’s knowledge at our facility to train their auditors for PQA+ as well as case studies and various other trainings.”

A Hobby Feeding His Community

Ziemke’s ability to raise quality food doesn’t stop at his careful hand with raising pigs. Though Ziemke works on the farm, he resides in Waseca, where he houses a small garden in his backyard. His next-door neighbor and pastor, Roger, often times reaped the benefits of the garden along with other community members. After realizing he didn’t have enough space to truly fulfill his drive to raise a thriving garden with different species, his barn owner allotted him space on the back side of the barn to till up soil and raise his fruits and vegetables there.

Since moving his garden to the countryside four years ago, the garden has grown to five times the size of its original footprint. Ziemke now needs a tractor to till the landscape for the garden’s soil bed. Both Ziemke and Roger tend to the garden daily throughout the spring, summer, and fall, watering the plants and hand-weeding. The garden is home to a multitude of species, including cucumbers, watermelon, raspberries, tomatoes, and kohlrabi – a fruit his father grew on their farm during his childhood.

A garden so large couldn’t possibly only feed two families, and Ziemke explained, “We give all the produce to people we know. Roger gives a lot of the produce to his kids and other neighbors in our community.”

He admits he isn’t a fan of much of the produce he grows, but he “really likes growing stuff from scratch and being able to provide for other people in the community. It’s also become a really fun hobby to do after work since it’s right outside the barn.”

There’s no question Ziemke goes above and beyond to do what is needed for the health and betterment of the pigs he cares for. Known as a dedicated manager by all who know and work with him, he embodies what the Minnesota pork industry is all about, highlighted through our six ethical principles: Food Safety, Animal Well-Being, Our People, Our Community, Public Health, and the Environment.