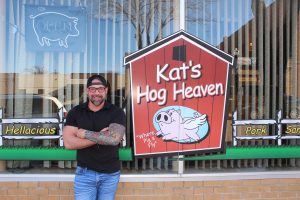 The Minnesota Pork Board recognizes Chef Donnie Schoenrock as this year’s Pork Promoter of the Year Award recipient.

Donnie Schoenrock has proved in the last seven years that one does not need to be a pig farmer to wholeheartedly believe in pork and spend their days advocating for the product. Previously a big city lover, Schoenrock stumbled by happenstance into small-town Jackson, Minnesota, and is now the proud owner of the renowned Kat’s Hog Heaven restaurant, where he promotes pork on a daily basis showing consumers the benefits and ease of cooking pork.

Born and raised in central Minnesota, Schoenrock originally found his passion in baking, specifically cheesecakes, while working alongside his mother in the food trailer/concessions business. While his brothers were in the garage with his dad, he Schoenrock was hip-to-hip with his mom in the kitchen. His weekends mainly consisted of cooking on the weekends at fairs and concerts, though it was always his mother’s dream to serve her food in a brick-and-mortar restaurant.

Fast-forward a few years, and Schoenrock found himself studying criminal justice and eventually received his law enforcement degree. At the time, law enforcement was a popular degree with few available job openings. Luckily, a friend alerted him of a job opening in small town, Jackson, Minnesota. Expecting the small-town life wouldn’t be for him, he only planned to work for the city police for one year before moving elsewhere, when he received an offer to work for the sheriff’s office in town. Needless to say, the small-town life captivated him, and he’s stayed put ever since, with a few unexpected surprises along the way.

Ten years into his career in law enforcement, Schoenrock found himself getting burned out. While meeting with a friend at Kat’s Hog Heaven in Jackson, a very common lunch spot for law enforcement officers to frequent, he was discussing the possibility of starting another venture. While the friends were conversing, the restaurant owner walked past and jokingly asked, “Did you say you wanted to buy this place?”

From there, Schoenrock’s wheels started turning; though he loved to cook, he didn’t know anything about running a business. After he couldn’t shake the thought of buying the restaurant, he and Bill met every Sunday for months, and finally, on December 6, 2016, Schoenrock bought the restaurant on a handshake.

To Schoenrock’s relief, Bill agreed to stay on the payroll and work part-time for one and a half years to show Schoenrock the ropes and teach him how to turn expenses, figure out labor costs, and other back-end business knowledge.

The name of the restaurant didn’t change, due to its familiarity and popularity, and core items remained on the menu, but little changes were made to make dishes his own. Navajo Tacos were an original staple at Kat’s Hog Heaven, and coincidentally, were also his mother’s top selling dish in her food trailer. The menu has evolved some since the change in ownership, but core items like the breaded tenderloin sandwich remain staples in the small-town restaurant.

More than just the Food

The trajectory of his career path was certainly unexpected, but Schoenrock explained, “This restaurant is the best thing that’s ever happened to me. It is the most rewarding thing to have people leave here happier after enjoying a delicious meal with an awesome atmosphere.”

Schoenrock has built a reputation for being someone people want to work for. With 80% of his staff as upper high school students, turnover is yearly, but he never has trouble filling open positions, due to graduating students recommending reputable younger students to take their place. He noted in his seven years of ownership, he has never once advertised for help to work at the restaurant, even through the labor shortages seen, specifically in the restaurant world, all across the country. He recently began a new venture in Jackson, opening Cabin Coffee in September 2022. Within three days of the announcement, all staff slots were filled.

“Part of my “Why” as an employer is to teach these young people how to be employable adults. I want to make them more responsible, teach them how to take constructive criticism and show up to work on time, all while working in a high-pressure environment,” described Schoenrock. “My approach is simple: I am your fellow employee until it comes time to be your boss. Though I am your leader, we work together as a team.”

Kat’s Hog Heaven offers a unique restaurant proposition, as the large majority of items on the menu are pork. With nearly every product sold in the restaurant made from scratch in-house – hand-cut meat, homemade bread, etc. – Schoenrock prides himself on being nearly a zero-waste restaurant, utilizing as much from the pig as possible. His philosophy on pork stems from the idea that pork is “fantastic untouched”.

He added, “People really try to make pork eccentric and do something cool with it, but that’s just not necessary. Personally, I prefer pork chops unseasoned because they can stand up for themselves. I would put a properly-cooked pork tenderloin up against any piece of meat in the flavor department.”

This philosophy follows through into the items you’ll find on the menu and the style of cooking found at Kat’s Hog Heaven. At his restaurant, Schoenrock showcases pork in a way people can make it at home. He described how people are intimidated by pork, but always encourages them to take it home and “just try it” with a very simple recipe with few ingredients.

“I want people to have pork be a consistent meal to make at home,” admitted Schoenrock. “I love the fitness industry and try to be healthy most of the time. I would pick pork tenderloin over a chicken every day of the week because it’s healthy, lean, packed full of protein, versatile, and I appreciate how pigs are grown. People just don’t realize this.”

Jay Moore, director of environmental services at New Fashion Pork added, “Donnie takes it upon himself to educate and endorse pork to each and every customer that walks through the door. While waiting on tables, Donnie takes the time to explain how they can make pork at home, even going as far as taking whole pork loins out to the table to describe how each cut is made, and how they can be used.”

Schoenrock feels a large responsibility to represent pork well, specifically due to the location of the restaurant. Pig farming is the lifeblood and livelihood of so many people in Martin and Jackson County, and he takes his duty of shining a spotlight on pork very seriously.

For seven years, Schoenrock has shown up to his restaurant and stayed from the time the doors opened to when they closed. He admitted he was scared when he first started the restaurant, as he was a single dad of two pre-teen daughters.

“I would get my kids from school and have them eat dinner at night in the back of the restaurant,” Schoenrock stated. “I abhorred my blood, sweat, and tears into this restaurant, and also into this town. I want Jackson to be the best city in the state of Minnesota, and be a place people want to start a business and send their kids to school.”

Not only does Schoenrock own a successful, thriving restaurant and coffee shop, but he is also a dedicated member of the community, having served on the city council, school board, and Chairman of a local non-profit. Often times, he had his daughters in-tow at the group meetings. He believes “if you care about your business, you need to care about your community.”

If he happens to hear community members talking poorly about something in the community, he happily joins in on the conversation and provides a list of boards or opportunities for the individuals to volunteer their time, talents, and discernment on to help fix their concerns.

“Getting involved in the community is so easy, and there are countless ways to volunteer,” Schoenrock explained. “If you aren’t involved or trying to make a difference in a specific aspect of the town, you don’t have a place to talk poorly about it.”

Shockingly, Schoenrock doesn’t consider himself a chef, despite the success of his restaurant and delicious dishes on his menu. To be awarded the Pork Promoter of the Year honor was “a really, really huge deal”, and hopefully will nudge him in the direction of wearing a chef’s cap someday soon.

When he heard he was selected for this award, he was surprised and resorted to pork being the easiest thing to promote. “I really believe in pork, and it’s not just because I own a pork restaurant. My fitness passion has allowed me to show people the healthy and versatile sides of pork while making it really simple and easy. I haven’t done any of this to promote a product, I’ve done it to support a product I believe in, and one that benefits people.”