Family of The Year Award Winner 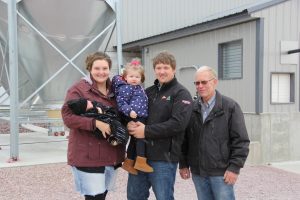 The Minnesota Pork Board recognized Jim Veldkamp’s farm transfer of ownership to the Kracht family as this year’s Family of the Year award recipient.

Arguably, a farmer’s greatest joy is building a sustainable and profitable farm to pass down to the next generation. Though Jim Veldkamp and his late wife JoAnn’s farm transition differs from the average family farm to the outsider’s eye, the same opportunities and challenges exist for Ethan and Chyana Kracht’s family, who have worked alongside Veldkamp for the last six years with the intent to succeed Veldkamp.

In 1973, Jim Veldkamp and his wife JoAnn purchased a farm outside of Jasper, Minnesota, farrowing only 75 sows in their first few years along with some feeder cattle. Over time, the farm grew by cropland acres and number of livestock. Soon after, they proceeded with strictly buying finishing pigs and raising them until harvest, but reached a plateau in profitability.

In the early 1990’s, Veldkamp decided their style of raising pigs was no longer profitable. Veldkamp had a background in carpentry and considered pursuing opportunities in that line of work while crop farming. In the summer of 1993, Gordon Spronk hosted a meeting in Pipestone, sharing a new strategy for efficient, profitable pig production. After attending the meeting with piqued interest, the Veldkamps invited Spronk to their farm to share more about the vision. During this meeting, the Veldkamps described their labor-intensive farming practices and Spronk teasingly asked, “Do you like to work so much?”.

That year, Veldkamps became one of the first shareholders in the Pipestone System, purchasing shares to help build a sow farm to supply weaned pigs to his nursery and finishing barns. They retained their farming independence, while taking advantage of a common swine management system and barn modernization.

“We thought the pig industry had passed us by,” Veldkamp reflected, expressing their hesitation to invest so much capital upfront to an idea that had not been proved to work or be successful at that point. “It’s known as the Pipestone System now, but at that time it was called the “10 Pound Pig Project”. But I am glad we were open to adapting back in 1993; that set the course for the rest of my career.”

Veldkamp explained how the switch to becoming a Pipestone shareholder set their farm on a new trajectory for business leadership, and looking back now, he recognizes it as a very smart decision.

Veldkamp credits the farm’s success over the last several decades to his wife, JoAnn, who loved everything the farm embodied. In 2017, JoAnn died of ovarian cancer. They had been married for 45 years when she passed, but her legacy throughout the community and the farm remains strong. JoAnn and Jim’s legacy also lives on through their daughter Jennifer, son-in-law Dean Lerwick, and three grandchildren Kate, Ella, and Will. The Veldkamp’s careful, calculated decisions have paved a path for the upcoming generation to take over and succeed.

Ethan Kracht grew up on a farm a few towns away from Veldkamp in rural Edgerton, Minnesota. Though row crops and cattle were what he was familiar with, he “saw the opportunity” to work at Veldkamp Farms raising pigs and took it. He willingly admits he didn’t have a passion for pigs at first, but over the last six years, the consistency and opportunity for constant improvement in raising pigs has enticed him.

“With row crops, there are a lot of things you can’t control, but with pigs, most deviations lead back to management,” Kracht described. “I enjoy numbers and the changes that go along with them that help improve the business.”

Kracht’s role on the farm began simply as a helping hand with daily chores and caretaking, but steady growth of the farm required more disciplined management. Since joining the farm six years ago, the operation has tripled in size, and Kracht saw the potential to take over in a management capacity and began creating effective changes on the farm.

“I am so thankful Ethan has come in to help with management,” Veldkamp graciously added, noting Kracht’s advanced proficiency working with computers, scheduling loads of pigs, and collaborating with processing facilities. “Ethan has gotten really good at projecting when the next load of pigs should get sold and when they’ll be ready, which I will readily admit I wasn’t good at.”

Managing people comes with many different challenges, but Kracht sees the opportunity and value in each employee and contract grower.  “It’s been fun for me to work with employees and growers to see how much better the farm can be, and also how much better they can be as people and workers. The success of the farm relies on the employees and growers; the farm isn’t much without them.”

Veldkamp added, “Our past, part-time, and current employees have all had a part in making the farm what it is today.”

“I always liked to be around business and appreciated the determination and hard work that goes into owning a business,” Chyana stated. “It was always my dream to own my own business, and now that dream is becoming my reality, which is really exciting.”

Chyana moved to the farm two years after Kracht began his transition into ownership at Veldkamp Farms. Following JoAnn’s passing, Veldkamp Farms utilized an accounting firm to handle the bookkeeping, but Chyana’s background in business administration allowed her to take over the financials and record-keeping. Chyana reflected, “It’s been a learning process, but I am thankful for the improvements it has brought to the farm.”

The Kracht’s look forward to continuing the family farm – challenges, opportunities, change and all. “It is a privilege and an honor to continue what Jim and JoAnn started and make our dream a reality,” Chyana added thoughtfully. “We are glad we get to raise our little ones on the farm, and our hope is that they will have the same opportunity in the future.”

To this, Jim responded, “It is very rewarding to see someone want to take over the farm. I’ve heard from both of them how grateful they are for the opportunity. They don’t realize I need them as much as they need me.”

Over the last several decades, Veldkamp Farms has operated with extreme integrity, always focusing on protecting the environment and bettering the rural community. Veldkamp Farms has received numerous awards for environmental stewardship both from the Minnesota Pork Board and National Pork Board, along with Veldkamp earning Rock County’s Outstanding Conservationist of the Year award on multiple occasions. Safeguarding the soil and water, maintaining an effective manure management system, and practicing ridge-tilling to avoid disturbing the soil resulting in erosion are a few of the ways Veldkamp Farms practices conservation.

Not only is Veldkamp Farms a positive business for the environment, it is also an asset to the community. The Veldkamps spent much of their time volunteering throughout the community. Veldkamp explained how JoAnn wanted to join the medical field in high school, but her calling as a farmer took precedence. The opportunity to serve as an emergency medical technician (EMT) for the Jasper Community Ambulance arose, and she jumped at it with Jim following her path shortly after. Both volunteered for 30 years as EMTs, and Veldkamp still continues his service today as an active EMT.

Veldkamp also served on the Jasper Development Corporation Board of Directors, the board of the local elevator, the board of the former Jasper State Bank, and was elected to the county’s soil and water board. He can also be seen at many community functions, such as fundraisers and county fairs, grilling delicious pork for attendees, and has been a gracious host for tour groups.

“All who know and work with Jim will attest to his commitment, integrity, and caring personality,” stated Christy Jackson, sales manager for Pipestone Veterinary System. “Not only does he represent these values, he acts on them, with angel JoAnn on his shoulder.”

When asked why he has been so involved in the community, he described how everything he does is a reflection of his farm and business. It is a rewarding feeling for him to help benefit the community in any way he can.

The Kracht’s echoed Veldkamp’s feelings on community involvement, hoping to immerse themselves in the community in the future to bring positive change. They reiterated the importance of being a sustainable farm known for doing things well to improve the environment and safeguard natural resources. “In raising a great product, we feel responsible that our pork is raised in a safe and transparent way,” declared Kracht. “We desire to do things the right way and leave things better than when we started.”

The decisions Jim and JoAnn made in the 1990’s set the framework for Ethan and Chyana to find success as they lead the farm, raise their family, and immerse themselves in the community. His vision to keep the farm together through his retirement is successfully playing out through an innovative succession plan keeping the farm as one. Veldkamp’s hope is that the farm will remain sustainable for the young Kracht family and that they will enjoy it as much as he and his family did.