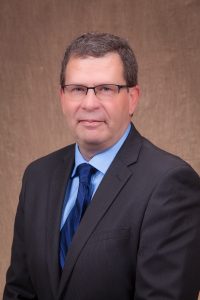 The Minnesota Pork Board recognizes Larry Liepold of Okabena, Minnesota, as this year’s Environmental Steward of the Year award recipient.

Larry Liepold has always strived to preserve the land, resources, and environment his family has been blessed with in southwest Minnesota. This year’s environmental steward award recipient is a fact and science-based supporter who challenges the status quo and embraces change easily if it proves to benefit the environment and is fiscally responsible.

Prices during the Farm Crisis were catastrophic; Liepold related it to watching a car accident and stated, “You have to watch, but you also want to be a part of the solution.”

As someone who has always challenged himself to do better, Liepold did exactly that and became part of the solution by following facts and science to renew his farming practices. His involvement and leadership on committees and boards across all levels of pork production exposed him to a world of different opinions and practices within the industry that all started with a trip to Iowa State University (ISU).

Before holding a board position, Liepold was invited to attend a meeting at ISU which was heavily supported by activist groups.

He noted, “We were not in friendly territory and the group presenting were not friendly to pork production. They had reasoning and rights, but we also had an opportunity to meet them and learn where they were coming from. This meeting stirred my passion to get involved with the Minnesota Pork Board.”

The first committee Liepold involved himself with was the promotion committee, where he found interest in the growing consumer perception of pork and its presentation in retail spaces. Decades later, and he still serves as a member of the committee, voicing critical evaluation before the group.

“The possibilities are endless in the promotion and image committee,” stated Liepold. “Every committee decision is right. If a committee agrees on an imperative, it’s a decision of the group, and like-minds usually prevail.”

In the 1990’s, Liepold was voted onto the executive board, followed by an election in 2001, 2004 and 2005 where he served as the Minnesota Pork Producers Association (MPPA) president. His leadership elevated to the National Pork Producers Council where he advocated for agriculture and “satisfied the need to discuss the issues with the people that make the rules.”

Similar to other farmers from his generation, Liepold grew up on a diversified livestock farm, but quickly cemented his interest in the pork industry after working at a large pig farm in the late 1970’s and early 1980’s. In 1988, he built his own pig barn and began farming cropland passed down from both his parents and his wife, Jill’s parents.

A diversified farm in today’s farming landscape, Liepold has his hand in several facets of agriculture raising pigs, corn, soybeans, alfalfa, barley, and his daughter Kristin’s show goats. Every aspect of his farm represents the summation of trials he’s conducted since building his first confinement barn.

“Seeing the build-up of a systems approach that provides a suitable environment to grow pork as the consumer demands and attend to the animal’s well-being while using less energy, land, and water and creating a valuable soil amendment in manure.”

Liepold constantly focuses on ways to farm better and more sustainably. With every new feed, piece of equipment, and idea, he follows a 3-trial test. If the tested subject proves to work, he tests it again; if it fails, he figures out what went wrong and gives it another try. If it fails three times, he moves on.

“I give everything an opportunity by challenging it and accepting what’s correct,” Liepold stated. “You can hear of practices and methods that may be true and work for others, but I won’t implement it until I see it with my own eyes.”

More than 15 years ago, Liepold was inspired by his neighbor to test strip-tillage methods on his land. What began with custom application from the local cooperative turned into Liepold buying his own machinery which he now uses on his own fields and custom strip tills for neighbors. His influence in bringing more strip-till machines into the area has created a ripple-effect, as more and more surrounding farmers realize the benefits of the farming practice.

Not only did the strip-till method save him time and money, but it also enhanced his soil’s health. Strip tillage allows water to reach the roots faster and provides more efficient use of oxygen and microbes in the soil. Liepold described the only reason they apply cover crops on their fields now is to feed the microbes and create an environment where the microbes will thrive and help the soil. Cover crops provide no profitability at the moment, but he knows there is opportunity for profit, and he is “working to discover how it can fit in [his] operation.”

Liepold also incorporates the valuable pig by-product of manure onto his land through a carefully calculated manure management plan. He explained the microbes and fiber included in manure provides a more equal and stable soil health than any commercial, mass-produced product created in a lab could. If a farmer wants to fully till their soil, they can do it well and raise equivalent plants, but every time, Liepold explained his soil structure will be superior.

“We are on soil that isn’t touched besides the strip where we put fertilizer where we plan to plant the seeds in the spring,” explained Liepold. “I am involved and dedicated to conservation tillage practices that have minimal disturbance to the soil, but I am not ready to go to full no-till as I believe crop nutrients need to be placed beneath the surface where the plant can pick it up.”

Pig farming is well on its way to raising a carbon-neutral pig. Calculated, effective strides over the last several decades have proven farmers are doing more with less.

Liepold shared his excitement for this effort saying,

“The carbon-neutral pig can be done. We probably won’t hit zero every year, and we need to forgive ourselves and move on, but I believe it can and will be done, and we are on the right path.”

Among aforementioned practices he executed in the field, Liepold has implemented a laundry list of sustainability efforts in his pig barns. Motion light sensors and timers to control barn temperature have cut electricity usage, along with utilizing LED lighting where it can work. Stainless steel water troughs replaced running nipples to conserve water, and recycling occurs across all aspects of his farm.

In his opinion, “most farmers believe they are environmental stewards”, but there is always the opportunity to level up and do more. Instead of simply setting goals, Liepold focuses on setting big-picture objectives with set goals in the plan to reach the objective. His philosophy is as follows: a goal is something he hits then is done with, whereas an objective keeps moving forward and continues to challenge him.

“If what I’m testing is working, it’s moving forward. If it doesn’t move forward, it’s not failing, it’s just not moving forward as fast,” he stated optimistically.

“I set goals and objectives constantly, but the catch that many people miss is actually sticking to them. I hope more people become true environmental stewards, always seeking to be better and challenging existing practices. You have to try something in order to challenge it.”

Throughout his career, Liepold describes the most rewarding part has been explaining to other farmers and the public the practices he’s implemented on his farm.

“Communicating and telling our story is rewarding,” he stated. “It energizes me when I can see the light go on in someone’s eyes as they realize modern farming isn’t what they thought it looked like.”

The reward of a continued farm in an environment where it can grow and thrive headed by his children’s leadership in the future is his definition of true success. His two sons and two daughters lend a hand on the farm, having a core role in the business. Diversity on the farm leads to an assortment of products and projects that lead to quality family time, whether they’re packaging barley straw into 1-pound packages in February or planting their fourth crop of the season.

His hope for his children and all Minnesota pig farmers is to continue to be premiere pork producers, leaving a very small footprint on the environment. At the end of the day, he mentioned farmer’s goal is to feed people and continue to do so using less and less resources.

“We don’t want to affect the environment with our farming practices,” Liepold declared.

“I want everything I put on the ground to stay there and make the best environment for the animal’s well-being.”

Farmers like Liepold are subtle, industry-shaking gems, transforming agriculture and environmental stewardship for the better for generations to come. Always determined to take the next step to improve from the day before, he follows the facts and data to enhance the environment around him.