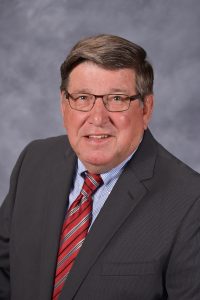 Reuben Bode embodies everything pure and good that pork producers stand for. He is the kind of man who can’t help but bring humor and a light-hearted presence into every room he enters. Those who know him describe him as kind, honorable, and passionate, with his high integrity driving the practices he follows on his farm and in his community.

Bode grew up on a small, diversified farm outside Courtland, Minnesota, with dairy cows, crops, and a few sows. Shortly after getting married to his wife, Judy, of 54 years, and spending time working in Mankato, they began to farm alongside Bode’s aging parents, officially naming the operation Rebco Pork in 1994. Moving back to the farm was always in the back of their minds when they married, and the family dynamic allowed for helping hands in a myriad of ways.

Judy added, “Reuben’s parents loved to be outside and help with the kids. It was a family operation all around. The kids also loved playing outside, and they learned to love the industry, also.”

Since arriving back at the farm, they have remained rooted in the area. In 1986, they sold the dairy cows after deciding they wanted to pursue a pig-focused farm. Doubling in size from 100 to 200 sows, the Bode’s transitioned the dairy barn to house pigs and gradually added more pigs to the farm.

“We knew we loved pigs, so transitioning to a pig-only operation was a happy day,” stated Judy. “Reuben’s mom used to farrow pigs years ago, and so we started to farrow together. Decades ago, I never thought these words would come out of my mouth, but once I started farrowing pigs, I found out I really loved it.”

From 1986-2004, the farm remained stagnant in size with 200 sows and farmland. Following a vocational in Swine Production and Management in the early 1990s, their son, Ryan, showed committed interest in joining the business, and the farm grew again to 600 sows. To date, Rebco Pork is home to 2,400 sows on the home site, along with ownership in three other sow units.

Once they knew Ryan was interested in joining the farm full time, it helped in deciding what direction they wanted the farm to go. The farm originally started as farrow-to-finish but made the switch to farrow-to-wean with three-week-old pigs leaving the farm to be finished growing with contract partners. Neighbors and community members soon realized a contracted partnership with the Bodes provided a viable career in raising pigs. Barns in the surrounding area were built, with many individuals building more than one barn to house pigs. Not only did the Bode’s farm begin to grow, but they also brought interested labor to the pork industry.

In 2015, Bode joined forces with Pipestone Systems. A 10,000-sow unit was built, a number that astounded Bode, and he purchased shares, earning a spot on the board. He later involved himself on the boards of another sow unit, becoming a major shareholder in both units.

“Reuben has been a valuable leader to our state association as a thoughtful and respected spokesperson of our industry. He has selflessly dedicated much of his time to share the voice of his peers in creating meaningful outcomes,” said Christi Johnson, sales manager at Pipestone Veterinary Services. “Reuben and Judy are progressive in their plans for the future and Pipestone is honored to partner with their family as they continue their legacy

Throughout his career in the pork industry, Bode was quick to grab opportunities to promote pig farming and pork, even earning the Minnesota Pork Promoter of the Year award in 2013 along with Judy. Volunteering at events like Oink Outings, the state fair, and Farmers Feed Us provided occasions to speak with consumers face-to-face.

“We love talking to people and promoting pork,” recalled Bode. “It is easy for us to promote pork together because we’re just sharing our farming story and explaining our practices to people in a way they can understand.”

Most notably, the Bode’s were well-known for the farm tours they gave on their farm. Busloads of kindergarteners, senators, governors, and online bloggers from the Metro area were found at Rebco Pork several times each year learning about the responsible practices involved in raising pigs. Bode described how parents coveted being chaperones for school field trips to the farm.

“It was good to have people come to the farm and see how the animals were treated and how clean the barns were,” Judy recalled. “We were introducing young kids to the industry and showing them what goes on inside the barns they see while driving down the road.”

Bode described his desire to “do his share” when it came to getting involved in associations, events, and boards. He remembered watching others join boards and involve themselves in industry groups and thought, “I can do that, too.” From his six-year term on the Nicollet County Pork Board in the 90’s, seven years on the Minnesota Pork Board with two years as president, and participating in the Minnesota Agriculture and Rural Leadership (MARL) program, Bode rarely backed away from opportunities to learn, accept challenges, and get involved.

A Love to Learn

As an avid learner, Bode was drawn to groups of like-minded people because he realized there was always more to learn and there will always be someone who knows a little bit more.

He offers this advice to younger individuals: “Don’t be afraid to join a group; and once you do join a group, don’t just stand in the corner. You need to be part of the group and contribute to the conversation. And if there’s a meeting, make sure you’re there. Connect with others in the same industry because there’s always something to learn.”

This advice was not lost to his children. Reflecting on his father’s ideologies around involvement, Ryan added, “I have learned to get involved, take that extra step, and be a little uncomfortable. I surround myself with knowledgeable people, because I’ve learned from my dad that’s how you make yourself better.”

As a third generation farmer, Bode has had the chance to watch and help raise the fourth and fifth generations of Bode farmers. He reflected on the pride he feels for their multi-generational family farm, and the joy he experienced watching his children grow up, and now his grandchildren.

“They are all so special, and I am so proud of each of them. They give me so much to look forward to. This is a family business, and we all work together and get along, and you just can’t ask for anything better than that,” stated Bode.

Ryan thoughtfully responded to the reason for the family farm’s success stating, “All three of us kids have learned from you (Reuben and Judy). That’s why we all get along and love being together; that’s why there’s no jealousy; that’s why our kids have good work ethics. Because that’s what they’ve been taught and what they know.”

Bode is especially proud to now own the entirety of his great-grandfather’s original family farm. After renting and farming his uncle’s acres for decades, he recently had the opportunity to purchase the land, keeping the complete parcel in the Bode name.

He explained his astonishment and awe in receiving this award and expressed his deep honor. “I enjoyed meeting with all the great people in the pork industry, learning from them, and tried to help in any way I was able. I have enjoyed being able to give back to organizations that have served my family business for years.”

Reuben Bode’s distinguished service spans across every platform – from involvement on his own farm to host tours, to serving on several boards and associations within the industry, to volunteering his time at countless events – Bode is well-deserving of this award, and the Minnesota pork industry is thankful for the impact of his efforts.